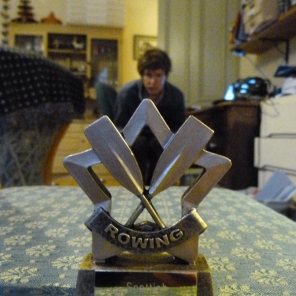 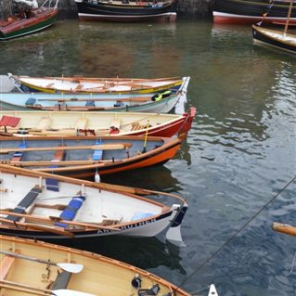 Old and new at Portsoy

Roughly 30 Rowporty folk (small & large) headed up to the Portsoy traditional boat festival this weekend where we were treated to some exceptionally exciting races!

Despite a pretty miserable forecast, Saturday was pretty perfect for racing – light warm winds and a flat sea (very unusual for Portsoy), and at times, even a bit of sunshine. The race was over a triangular course about 2.5 km long with 2 mass buoy turns and the finish line straight across the harbour – fantastic for spectators.

8 other clubs were racing: Ullapool, Crail, Pittemweem, Queensferry, Port Seton, Anstruther and on home turf at their first EVER regatta: the Portsoy skiffettes in their shocking pink boat, with their pink lifejackets and every thing else! (In case you didn’t know, this boat is an all women build and they’ve done a fantastic job. The only down side is that some of the local men aren’t so happy to be seen in pink…)

To kick start the racing was the men’s open race. Porty were not in a strong position on the start line (2nd from the outside) so it was going to be tough to get water at the 1st buoy…..BUT they pulled hard and did it – first around the buoy ahead of Newburgh. And they managed to keep the lead to the end, despite a few attacks from Ulla on the home straight – so a win for Rowporty, 2nd place wet to Ulla, and third to Newburgh.

The 2nd race was the women’s open. Despite a pretty good challenge from Porty, gold went to the very together Anstruther team, followed by RowPorty in Silver and Ulla in bronze.

50+ was the 3rd race of the day yet our crew was a 60+ one. They were looking very tidy rowing together. Yet some more youthful 50 year olds pipped them to the post – in a very exciting finish Anstruther came 1st by less than a meter (!!) followed by a slightly disgruntled Ullapool team who had had the lead the whole race!

The next race was the 35+ mixed, and for this, gold went to a solid looking RowPorty team followed by Crail then Ulla. Crail are a newer club, but looking good and one to watch out for…

The men’s 35+ followed this. Short of men, Porty had Roisin on stroke. It looked like a very promising race for our team as they rounded the first buoy first, keeping a good lead round the 2nd buoy… but then Ulla (who were quite a few boat lengths behind) fought back on the final leg, pushing our team to the limit, and in another exciting finish, Ulla took gold by no more than 10 inches!!!

Porty came out of the turn last of the bunch (6th) but the bunch more or less stayed together over the next leg. At the next turn I think the order was something like: Ulla, Antruther, Crail, Newburgh, Porty, Port Seton… then there was a fantastic sprint to the finish with 4 boats entering the harbour together side by side (thank goodness it was wide enough!). 1st place went to Ulla, very closely followed by Porty in 2nd place, and probably ½ a meter behind, 3rd place went to Antruther, a second after which Newburgh crossed the line in 4th, followed by Crail a couple of seconds later in 5th. What a race!

Luckily for the nerves, that was the end of Saturday’s racing. Post racing we did a bit of plodding and attempted some fishing outside the harbour with all the kids and just managed to get in before the heavens opened with an almighty downpour.

Luckily this didn’t last long, and after a bit of socialising with other skiffies in the tattie shed, the Porty bunch had a bonfire on the beach well into the evening.

On Sunday the wind had changed direction (NW) and the sea had picked up. The novice races went ahead which was a short sprint (400 m) from the harbour, out round a buoy, and back again – doesn’t sound like a lot, but conditions were challenging to say the least, with huge lumpy waves. Not having a full team, we teamed up with Queensferry to create a QueensPorty team. The races were in heats. Our first was against Ullapool – it was close, but QueensPorty took it and were through to the semifinals. In the semi’s QueensPorty were up against Newburgh. Newburgh won this one and went through to the finals against Pittenweem, which Newburgh won.

The rest of the races on the Sunday were cancelled due to worsening sea conditions.

Despite this all RowPorty members seemed to have had a grand old time – the organisation of the racing was faultless, everything ran smoothly to time, and there was a nice relaxed atmosphere. Many folk enjoyed a good look around the rest of the festival – the boats, the craft, the food – what more could you want?!….Then to top it all off, at the awards ceremony, after the points had been added up, RowPorty came away with the trophy prize for points – the cherry on the cake!

Thanks to everyone for coming and making the event so successful for our club.