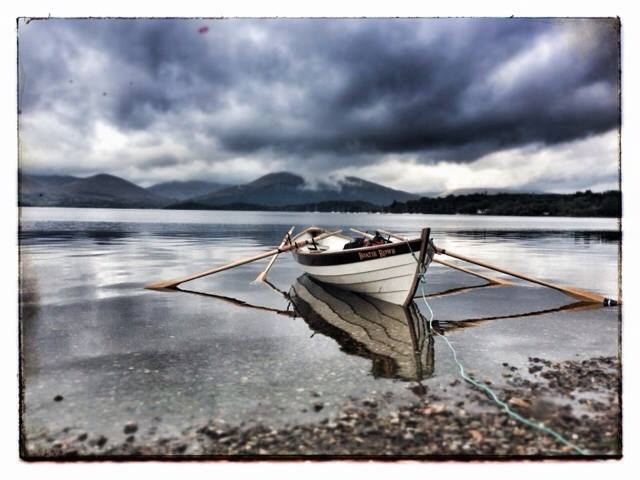 Last Sunday, I was lucky enough to go skiffing at Loch Lomond as a guest of Cockenzie and Port Seton’s finest, the ‘Boatie Blest’crew. Initially, we numbered 7, so the plan was to take a rescue boat and use it as an overflow vessel, swapping the crew around. As it transpired, the 8am departure proved too much for some and we left as a 5 – just enough for a crew.
We launched at the beach in the picture above, which is at Balmaha. There’s a newish Visitor Centre here, with excellent toilet and shower facilities, as well as lots of leaflets and a very helpful Ranger. There’s a sizeable car park and it’s a short wheel down to the water’s edge. It’s an easy launch and a spot very popular with kayakers.

Once afloat, we rowed straight across to Luss, a distance of around 5 km. We moored ‘Boatie’ on a fallen tree on the beach and headed off to explore on foot. Luss is a bustling village in the summer, but was quite deserted at this time of year. However, that means that you can marvel in bewilderment at the garden ornaments in the quaint, estate workers cottages. Think … gnomes, meerkats, lions, bird feeders, more meerkats, wind chimes, more lions, more gnomes, more meerkats … Hundreds of the things! 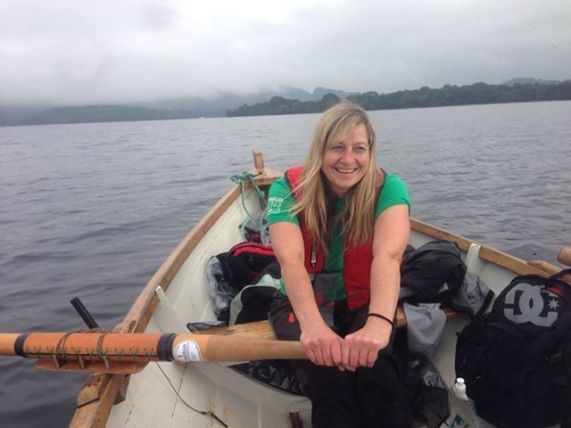 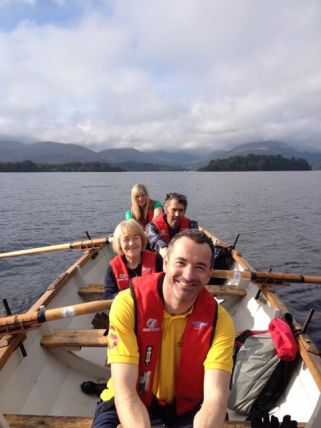 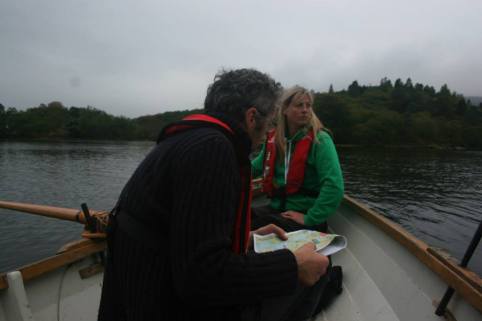 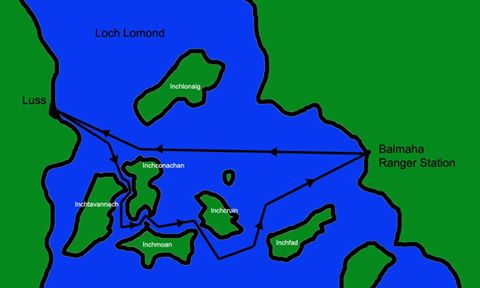 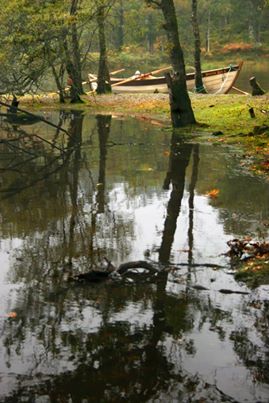 Boatie at Loch Lomond
The smart skiffers amongst us had packed a lunch box and flask. I’d strongly recommend doing this because nowhere on Luss is particularly cheap and if you row- up an appetite, you’ll be skint in no time.
Fed and watered, we headed back, this time taking in the islands and landing on those we could. We went wallaby hunting at Inchconnachan, but if they were there, they weren’t letting on.

We continued on our journey, arriving back with plenty of light. The car park barriers get locked at 4pm, which was a shame on such a stunning day, with easily 3 hrs more light to be had. There was so much more to explore and this is a weekend trip waiting to happen.  On our return, we spoke again to the Ranger and asked about the possibility of the Loch for a freshwater regatta. The Ranger indicated that they would be delighted to encourage our environmentally vessels onto the water and gave us some helpful information about taking the idea forward.

Loch Lomond can get choppy, but nothing like the sea. The 2 biggest considerations are “can you read a map? “ because trust me, some of the islands look the same and meandering in and out of them, you can become quite disorientated. Secondly, “do you know your port from your starboard, your red from your green and your rules of the road, so to speak?”. There was a lot of motorised traffic using the Loch and it’s helpful to know where you should be with regards to the channels. For one who is clueless about these things, I was reassured by the fact that skiffs can shift pretty quick when they need to and can sit in very shallow water until most things pass. Phew!

Lastly, here’s a wee map of our journey, courtesy of Jon at Port Seton. Thanks to Andrew, Jon, Martine and Stu for a lovely trip.
Ali