6 of us from Rowporty went to the Jacobite Muster, Ali took the North Edinburgh skiff: Troika, whilst Max, Calum, Chris, Mhairi & Patsy went with Ice Breaker.

We set off in wet, windy weather from Portobello, Max & Calum towing Ice Breaker, whilst Mhairi, Chris & Patsy travelled together. We only stopped off once, to brew a cup of tea in Glencoe. The weather improved as we went. We got across the Corran Ferry in no time at all & arrived at Acharacle, the starting point of our row up Loch Shield to the Jacobite Muster at Glenfinnan. Ice Breaker & the guys already there. There was a bit of a chill wind. We set off as we were ready: North Queensferry first, then Ullapool, Rowporty, Anstruther & the other 4 skiffs a bit later.

It was about a 2 hour row to Glenalandale where we were due to wild camp for the night, luckily we had the wind behind us to help us along & the rain held off. Although we had a lot of kit, it didn’t impede us at all. We reached our camping point at dusk. Just enough time to pitch our tents & get supper on the go. Mhairi ably assisted by Chris, treated us to a wonderful meal of salmon teriyaki, managing everything on one burner, whilst I cooked the noodles (I think!). It felt as if she fed 5000 of us, although in reality it was probably 8 – 10 folk. Absolutely brilliant meal – if this is the standard to expect on wild camping trips, please can I come again!

Ice Breaker on the Corran Ferry 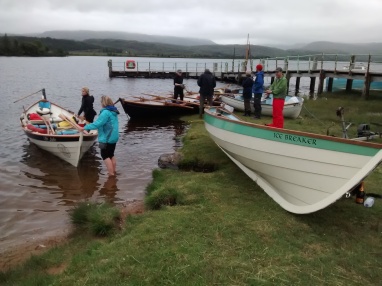 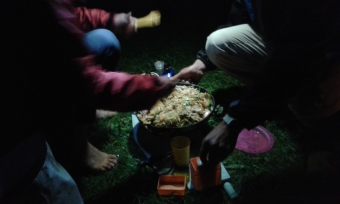 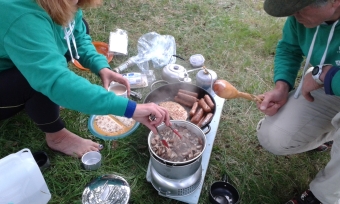 After supper, some of us, well probably only me, sloped off to get some kip, whilst most sat round a campfire into the wee small hours [Campfire story here please]. The camping was fine, a few midges to annoy us, but nothing too drastic.  It was great to be camping with a largish group who had all rowed to get there & well away from cars & all mod cons, relying on our wits.

The next morning before striking camp we were treated to another feast of Vegetarian sausages, mushroom & potato scones cooked in egg – absolutely delicious once again – thanks to Mhairi & sous chef Chris. We struck camp in the sunshine & I was optimistic enough put on sunscreen without having the sense to check the sky – the next minute it was pelting down & we had a good soaking for 15-20 minutes. However, with spirits undampened, we set off rowing in company towards Glenfinnan. As this was ‘Troika’s maiden voyage we decided to salute her as we arrived at Glenfinnan, which we all enjoyed. 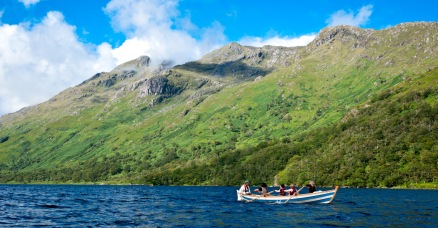 Troika on way to Glenfinnan 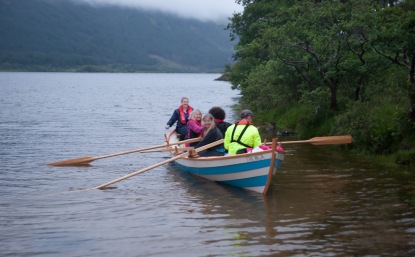 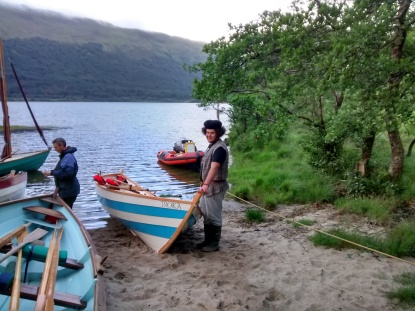 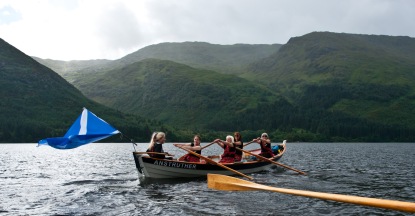 The only disappointing part of the trip was our arrival at Glenfinnan where we were underwhelmed by the welcome, which I would describe as ‘polite indifference’, although a few folk did welcome us, not sure if they were locals or tourists.

Soon after we arrived, Max & Mhairi took a minibus with others to go & collect their cars/trailer. I went briefly into the highland games, as did Chris & Calum, but  soon found some Boatie Blest folk at the visitor centre having tea, whilst I held my wine under the table taking an occasional slug! Later I had a row in Troika & then set off to have a cuppa in the railway carriage at the station that’s used as a cafe. Whilst there I saw the Jacobite Express which stopped briefly at Glenfinnan station before going on its way. I then walked under the railway line & along a crazy path which led me up to a vantage point where I could look down on the Glenfinnan Viaduct, with great views also down Loch Shiel.

Meanwhile Chris stayed on at the Highland Games & ran a hill race of which he writes:

“After we came ashore at Glenfinnan I spent most of the afternoon at the highland games. I had noticed that a ‘hill race’ was on the list of events virtually at the end of the day. I was keen to take part in this as taking part in a highland games would be a first for me. I had no idea how long the race would be (there are some big hills around Glenfinnan!) but on enquiring I learnt that it was more of a mad dash up to the top of a nearby viewpoint just behind the visitor centre and then back into the arena.

In the meantime I had a few hours leisure to take in some of the events. These included dancing, piping, track and ‘heavy’ events, including the caber which, although open to all comers I was not tempted to take part! Also noteworthy were a number of magnificently attired Jacobite soldiers who looked as of they had stepped straight off the pages of one of the military history books in which I had sought inspiration for Porty’s own outfits for the occasion. It would be fair to say that it would take weeks of work to achieve the authenticity which these soldiers had attained, complete with broadswords, flintlock muskets and dirks. After a parade around the arena this contingent took up a defensive position around the beer tent and held this formation until the close of the games.

Of particular interest to me was to see pipers competing in the pibroch (piobairachd) competition. This is the oldest form of music written for the bagpipes and although not the easiest to appreciate, when performed in such an atmospheric setting as this with a backdrop of the loch and its surrounding hills, it was hard not to be moved by it.

Shortly before the hill race there was the tug of war. This was keenly contested but in the end the strongest team and incidentally the smartest dressed, being all clad on the local estate’s tweed were clear winners.

The adults’ hill race was preceded by the junior event run over the same course. It was easy enough to track the runners’ progress up and back down the hill before they reentered the arena to loud cheers and applause. The winner was incredibly quick and I overheard mutterings that there was no way he should have been in the junior event! When the last junior runner was back in the adults race began. The ascent of the hill was step and muddy and the descent reminded me of the cheese filling race which takes place on Gloucestershire and results in a large number of hospitalisations reach year. There were fortunately none on this occasion and we were all soon back on the arena bring greeted by the cheers of the crowd. A great feeling! One of the ‘ghillies’ ran and was awarded the prize of first finisher wearing tweeds!”

Once we all assembled again we decided to head off to Arisaig where we hoped to row the next day. Extensive tooing & froing there whilst we tried to find somewhere to wild camp in the face of full campsites & endless notices telling us we couldn’t camp or park overnight. Eventually, Chris pointed us in the direction of Rhu & Mhairi’s persistence paid off. Right at the end of the road I spied a possible spot with a lovely view over to the small isles. We parked Ice Breaker just a few yards away in a lay-by & finally pitched our tents – only to be attached by a plague of the little blighters. We retreated to a natural ‘kitchen’ nearer the sea where we had another superb meal of salmon & pasta & drank yet more wine. I went off to bed early, but the others sat up late round the camping stoves (no fires this time – as it felt like wild camping was pushing our luck here). We had a leisurely breakfast the next day before heading in to Arisaig.
As the tide was wrong for launching, Mhairi Chris & I decided to head off home. On the way back we stopped in Glencoe under the 2nd sister, they went for a swim, whilst I brewed some coffee & we had a leisurely picnic of left overs. We sat for well over an hour sharing stories of our families & just hanging out on the warm hillside. Brilliant! Our last adventure was a deviation down Glen Orchy – great to get away from the A road & into a winding back road.

Thanks to Max & Calum for towing Ice Breaker, & to all for good company & a great trip.